I’ll have the Quad Big Mac and Super Size the Fries: McMaster researchers discover serotonin blockade may allow us to burn the fat like our youthful selves used to. 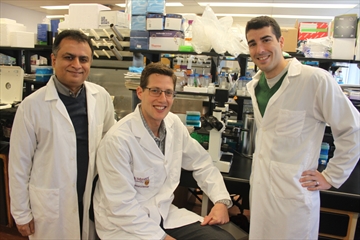 A new discovery from researchers at McMaster University could be a major breakthrough in battling obesity and diabetes.

The team is hoping its discovery can lead to a pill or patch that would turn up the body's "metabolic furnace" and burn more calories, said Gregory Steinberg, professor of medicine at the Michael G. DeGroote school of medicine.

Their findings were published Monday in Nature Medicine. The study details how the Mac researchers identified an important hormone that is elevated in obese people and contributes to obesity and diabetes by inhibiting brown fat activity.

Brown adipose tissue, widely known as brown fat, is located around the collarbone and acts as the body's furnace to burn calories. Obese people have less of it. McMaster researchers have discovered that a lesser known peripheral serotonin that circulates in the blood reduces brown fat activity or "dials down" the body's metabolism.

Steinberg, the paper's co-author and also co-director of MAC-Obesity, the Metabolism and Childhood Obesity Research Program at McMaster, said the "results are quite striking."

Steinberg said tests on mice showed a 25 per cent drop in body weight, without any change in diet or increased exercise. It may be the closest thing to a magic weight loss pill yet found. He said at first the results "seemed too good to be true."

"We are very excited," he said. "By reducing the production of this serotonin, it increases your metabolism."

Steinberg said the serotonin "acts like the parking brake on your brown fat" and slows down metabolism.

The majority of serotonin in the body is produced by an enzyme called tryptophan hydroxylase (Tph1). The McMaster team found that genetically removing or inhibiting this enzyme allowed the brown fat to burn more calories.

Steinberg said it's important that inhibiting the peripheral serotonin doesn't affect the serotonin in the brain or central nervous system functioning. That should make it healthier than current weight loss drugs that suppress appetite by affecting levels of brain serotonin. Those drugs have been associated with health problems including cardiac complications and increased risk of depression and suicide.

"It's a much safer method to work with increasing energy expenditure instead of decreasing the appetite," said Steinberg.

The McMaster researchers are now working on a pharmacological "enzyme blocker" that could come in a pill or patch form, said Steinberg.

A treatment available to the public could still be 10 years away, he estimated.

This study, conducted over five years, was supported by funding from the Canadian Diabetes Association, the Canadian Institutes of Health Research, Crohn's and Colitis Canada, MAC-Obesity and the Natural Sciences and Engineering Research Council of Canada.